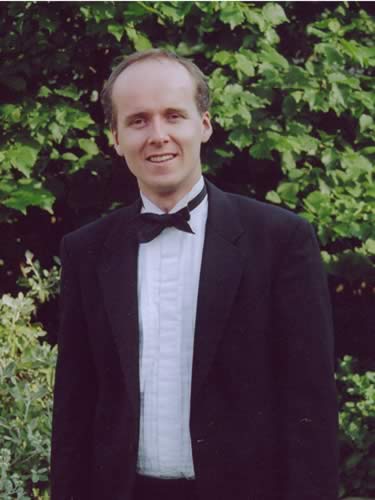 Keith Roberts, ready for the concert

And in rehearsal mode!

Keith took over the baton from Andrew Kennedy in September 2003.

While a choral scholar at King’s College, Cambridge, he directed the choral scholars’ group Collegium Regale on tours and in concerts all over the UK, as well as accompanying the choir further afield (among other things, singing Gershwin in the Sydney Opera House). He now sings as a countertenor with many of London’s top choirs, such as Polyphony and the choirs of Westminster Abbey and Cathedral, and as a soloist and consort singer. His arrangements are performed by many groups, and have been recorded on several CDs and broadcast on radio (and Brazilian television). His choral work Veni was performed at the Three Choirs Festival. Having presented some of his sparkling arrangements to great audience acclaim, the Allegri Singers are looking forward eagerly to adding more of his new arrangements and compositions to their repertoire.

In addition to the Allegri Singers, Keith also directs a dynamic professional close harmony group, Close Encounters. His work with amateurs includes conducting the Jazz Choir of the Addison Singers.

Sadly, Keith will be leaving the Allegri Singers at the end of the 2007-2008 Season. We are pleased to be able to announce that Tom Bullard will be taking over from September 2008. We wish Keith every success in the next stage of his career.